The biggest dream of my life is reality!... On Wednesday the 23rd of March my first car has been presented at the New York Auto Show!

A concept car which previews the Genesis design trend for the future, result of an exciting work done at Hyundai Design Center, where I have been the exterior designer of the project.

A big thanks to the all team that gave his contribution to achieve this amazing result! 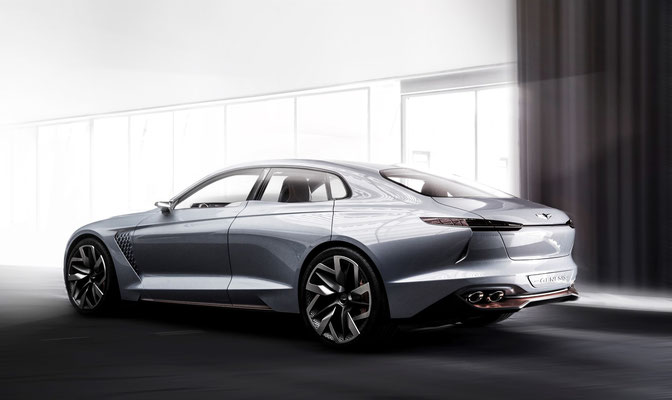 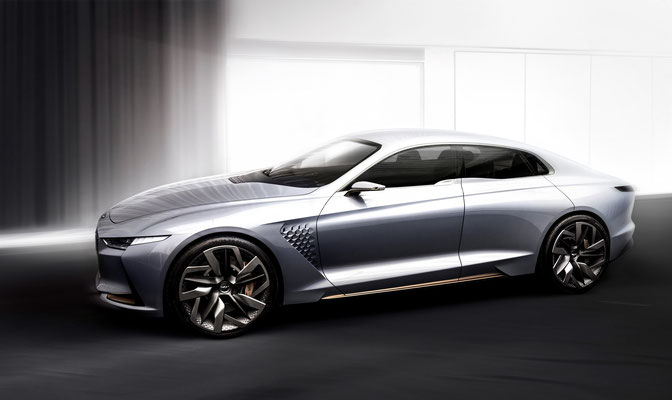 Acknowledging the GENESIS brand’s sporty and agile nature, the hybrid concept generates 245ps and 36.0kgf.m of torque from its 2.0 GDipowertrain coupled with an 8-speed automatic transmission. The advanced technological features and precisedesign language of the concept emphasize key aspects of Korean culture,while elevating the value and perceptionof the GENESISbrand.

Manfred Fitzgerald, Head of GENESIS said: “The New York Concept is a progressive concept car that showcases the design quality of the brand. With its expressive volumes and refined design, the New York Concept truly embodies the ‘Athletic Elegance,’ that characterizes GENESIS products and will continue to do so for future models that come from our luxury brand. Revealing the concept in New York is a fitting opportunity for GENESIS.”

The design teams took inspiration for the New York Concept from modern luxurylifestyles and products, plus the early success and progression of the GENESISbrand. They merged this confidence with forms fromnature, and the process of transforming raw materials tocreate an uncompromised expression of pure technological art.

The nature-inspired character of New York Concept is seenthrough simpleyet powerful forms with voluminous surfaces and coherent features.The overall shape of the concept is characterized by a long hood and expansive dash-to-axle ratio, visualizing the car’s performance-oriented nature and its resulting athletic stance.

At the front of the car, the New York Concept demonstrates power and confidence as growing attributes of the GENESIS line-up.The prominent, upright grille is visually supported by sleek, horizontal headlamps. The deep inner edge of the lamp is characterized by a pixelated light guide, giving a sophisticated,vibrant appearance.Air flow guides sit below the lamps, channeling air through the forward wheel housing.Pronounced front fender volumes, enhanced with longitudinal crease lines, complete the concept’s road-focused attitude.

From the side, the sleek and tapered cabinemphasizespowerful shoulders, bringing visual power over the rear wheels and quarter panels, adding to the impression that the New York Concept can deliver the power expected of the luxury sports sedan.Short front overhangs contrast with longer rear overhangs, completing the proportions of an elegant and refined performance car.

With its visually expressive form,theNew York Concept is complemented by thorough and creative attention to detail. The unique treatment of the engine hood and side vents blend function with style, creating a new precision aesthetic. The integrated vents for the hood, front fenders and quarter panels improve aerodynamic performance, a reflection of the hybrid GENESIS model’sfuel efficiency capabilities.

The front and rear door handles sitflush with the bodywork, integrated along the belt line of the New York Concept, further enhancing aerodynamic performance with simplicity in design.The exterior panels are finished in a custom-designed Ceramic Blue color, while copper-colored inlays in thelower bumper fascia and sillsconvey the uniquely modern approach of GENESIS design and material language. 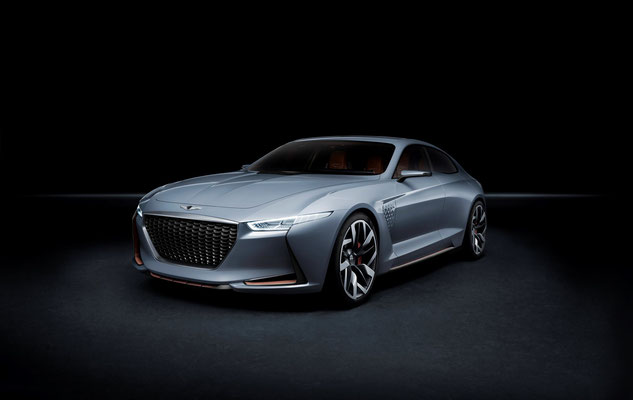 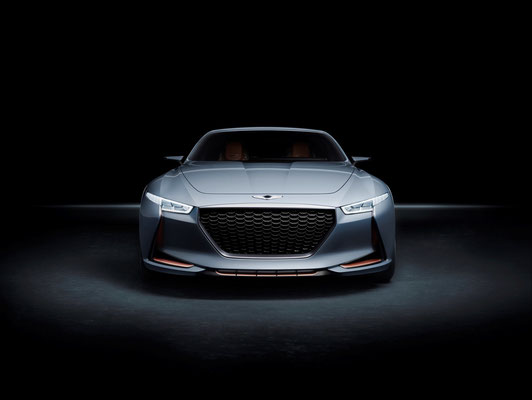 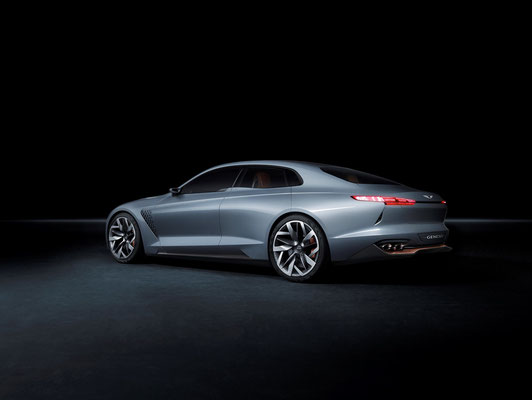 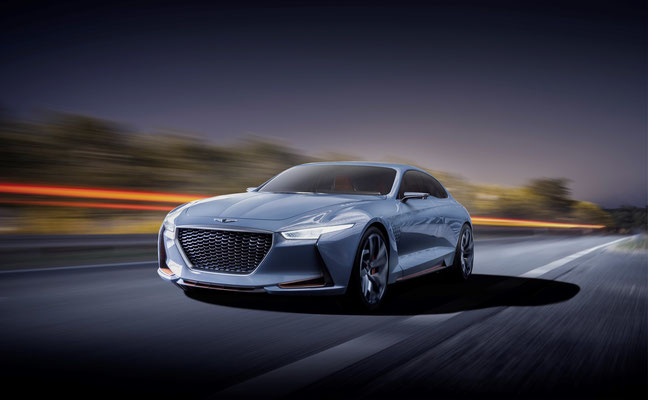 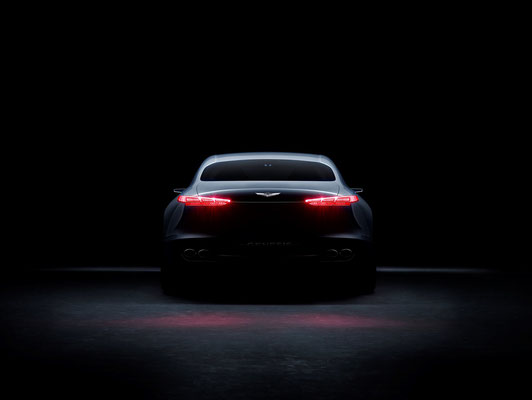 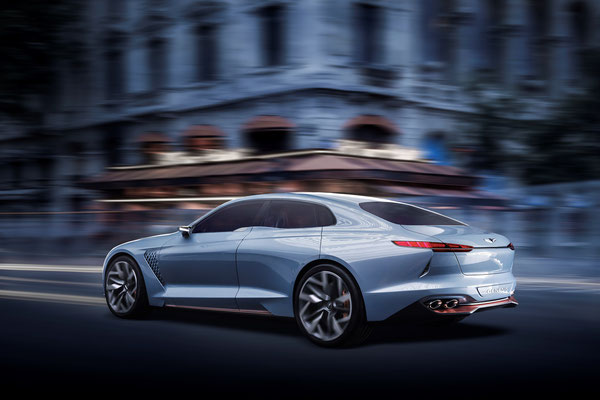 The interior of the New York Concept further projects the future design direction of GENESIS. It expressesa high-tech and sophisticated ambience, emphasized by the use of an advanced information control unit with a distinctively curved display.

Eliminating some of the negatives often associated with increased technological content in a luxury vehicle, the design team took an innovative direction for the instrument panel design. A 21-inch floating, curved screen incorporates driver instruments and multimedia functions, creating potential for new, sculpted formsfor the front seat occupants. The digital display is combined with classic analog driver instruments.The concave screen and the convex instrument panel complement each other in an aesthetic interaction while transmitting visual lightness to the interior.The open steering wheel design is ergonomically formed to facilitate visibility of the instruments while enhancing handling control.

A logical and spacious center consoledivides the interior space through its length axis into two separate halves. Combined with the curved, floating screen, the Central Control Panel (CCP) creates a new user experience through a tactile and considered control lay-out.Finely polishedGENESIS Concept aluminum inlays for the interior incorporate a handful of essential functional switches and reflect the GENESIS commitment to deliver high-quality design through exceptional attention to detail. 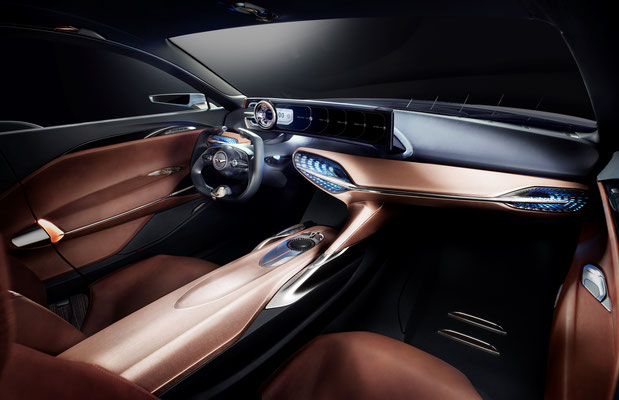 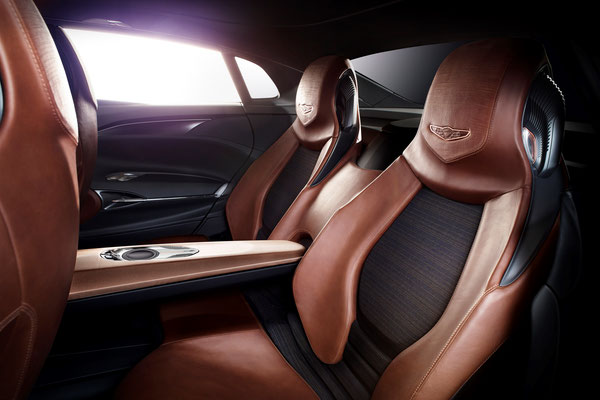 Highlighting the visual connection between the instrument panel and the floor console, which to the eye looks like it is visually floating, the New York Conceptuses metal for contrasting effect. Copper-toned, stainless-steel mesh echoes the copper accents of the exteriorand demonstratesa new, lightweight textileapproach. The New York Concept also features polished aluminum switchgear and functional elements, with small touches of copper applied on exterior accents.

The user interface presents all relevant information at a glance, combining touchpadswith the advantages of today’s rotarydial-based interfaces.Additionally, a 3D gesture-control sensor allows the operator to ‘throwover’ specific content from one area of the screen to another, raising the freedom for personalizing the display information.

The New York Conceptprovides a glimpse into the next-generation driver interface, ready to handle the growing complexity of a connected, digital world, where user-friendlinesssafety and functionality set the standard.